What is Lung Cancer?

Lung cancer is a type of cancer that begins in the lung – it is an abnormal growth in one or both lungs. There are two main types of lung cancer: 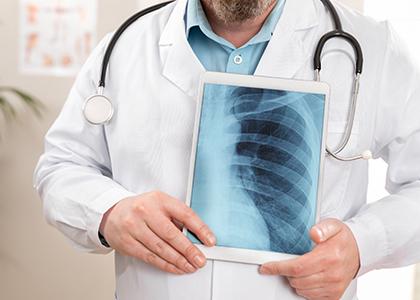 While lung cancer can happen to anyone, studies have shown that some groups of people with certain risk factors are more susceptible to developing it. These risk factors include:

Lung cancer does not usually cause symptoms, but symptoms that may develop as cancer grows are:

Please note that these symptoms are not always due to cancer, and may be caused by other underlying health issues. However, should you experience symptoms, and they last for long periods or intensify with time, do make an appointment to be screened as soon as you can.

Regular screening may help in early detection of cancer. During screening, the doctor will prepare the patient for more in-depth tests such as:

After the tissue samples are collected, they will be sent for analysis by a pathologist. If they test positive for cancer, further testing can help determine whether the cancer has spread. This test involves being injected with a radioactive chemical so that abnormal areas will be highlighted the imaging scans.

Depending on a patient’s severity and stage of cancer, as well as age and general health, the doctor will tailor a treatment plan to control and manage symptoms. Treatment plans may include one or a combination of the below treatments:

If the cancer is in its early stages and has not spread to other parts of the body, a complete cure is possible through surgery without further treatment. The doctor will surgically remove the tumour and nearby lymph nodes. There are a few types of surgeries, which include: